On tap for the summer I’ve got two tomes on Communist atrocities.  I kicked it off with Frank Dikotter’s Mao’s Great Famine, which explores the devastating policies of The Great Leap Forward (1958-1962) during which roughly 45 million people died.  The book is a thorough exploration of the Party’s follies in this period.  In large part, Mao was motivated by Kruschev’s maneuvers in this period.  With Stalin dead, Mao felt he could become the leading light of the Communist world.  When Kruschev vowed to outproduce the US in short shrift, Mao responded by claiming the Chinese would soon outproduce Britain.  What followed were a series of policies of sheer madness.  Mao called for a rapid collectivization of agriculture and industry. Personal property and farms were seized.  Collective farming began. The party handed down  experimental farming techniques like close cropping and deep plowing to help increase rice and grain yields.  Of course, yields declined in a devastating fashion. Foolish water conservancy projects were enacted.  Backyard steel manufacturing came next.  Output dropped and the quality of goods produced were terrible.  Putting on a brave face to the outside world, the Chinese honored all their trade agreements, exporting grain while their own people starved. In short, everything went wrong and people paid with their lives on a grand scale.The book does a great job chronicling the policies, analyzing Mao’s role in the debacle, looking at the party bosses, examining the brutality of the local cadres, exploring the culture of fear, and showing how such devastation could come to fruition.  The book is not so successful in exploring the lives of the millions that die.  The book doesn’t have that personal quality or the human touch that many historical works carry.  The book showcases the “complete lack of connection between people and party”, but the book’s focus clearly lies on the side of the party.  That’s valid.  The level of hubris, fear, and folly within the party is staggering.  I also imagine the tales of survivors and the dead would be hard to come by.  Were these ever documented by the party? If they were, in all likelihood they would be sealed tightly in a vault somewhere.  That said, throughout the book, you get lists of atrocities within a region, followed by a short paragraph or anecdote focused on a citizen.  These little glimpses into the lives of the people are spread throughout, and though they are enough to give you a true sense of the calamity on the ground, there is a clinical remove at play.  I would have liked the book to get to the heart of the horror just a little more.

I’ll take a couple weeks away from this grizzly fare, but Voices From Chernobyl  loom in my future.
Posted by Plotbox at 9:17 AM No comments:

Under The Big Black Sun: A Personal History of L.A. Punk by John Doe & Tom DeSavia

Under the Big Black Sun is an essential rock document.  It chronicles the formation of the LA punk scene, focusing on the years between 1976-1980.  The book consists of essays by the folks who were there.  John Doe, Exene, Dave Alvin, Mike Watt, Jane Wiedlin and plenty others.  In fact, don’t bother reading the book, you’d be better off listening to it.  The audio version features the authors lending their own voices to the proceedings.  The audio book drips with enthusiasm, personality and authenticity.  I consider myself pretty knowledgeable about this history, but there was still plenty of fresh material to be gleaned.  Most fascinating was discussion around how the introduction of hardcore into the scene really changed the face of the LA punk world.  In Under the Big Black Sun, hardcore, epitomized by Black Flag, brings about less inclusion.  The scene becomes more violent, less open, less friendly to women, minorities, and the lgbqt scene.  Things unravel as the kids from the beaches and the suburbs roll into town.  Rollins gets his say, but unlike in Michael Azerrad’s Our Band Could Be Your Life, which champions Black Flag as such a seminal band to the development of the indie rock industry, in Under the Big Black Sun, Black Flag takes on a much more villainous role.   Good stuff.
Posted by Plotbox at 10:27 AM No comments:

Pulitzer Prize Smackdown: The Sympathizer vs. The Orphan Master's Son

I was really taken with Viet Than Nguyen's The Sympathizer.  Winning a Pulitzer and an Edgar was enough to make me check it out.  The Sympathizer is a fresh look at the Vietnam War, told from a Vietnamese perspective. The book opens with the fall of Saigon and the escape of a cadre of South Vietnamese military to America with their families.  Amidst that crew is our narrator, a North Vietnamese spy who has been embedded amongst this military group. The book jumps between scenes of atrocity in Vietnam, and the narrator's time spent in America, where he is keeping tabs on the South Vietnamese exiles who are plotting to take back their country by organizing a military insurgency from the Laotian border.The Sympathizer, however, is more than just a war story. It’s a book about immigrants, refugees and minorities making their way in America and in the world. The narrator, born of French father and Vietnamese mother, was never wholly accepted in Vietnam, viewed as a bastard.  As a supporter of the communist North Vietnamese, yet living amongst the South, he's a figure constantly torn between two worlds. Once he arrives in America, he fully becomes the "other".  Nguyen's insights into identity politics and the plight of the "other" are the moments when the book really sings.  The standout scene may be when he is brought in to consult on a Hollywood film about the Vietnam War.  He's given a script where the Vietnamese do nothing more than merely scream in pain. Though the film is ostensibly about their war, they get no lines.  This passage is a brilliant condemnation of the white washing of Hollywood, of the entertainment universe systematically removing the voice of minorities.  Though the book is firmly planted in the Vietnam and post-Vietnam years, The Sympathizer seems fresh.  Given all the race baiting happening in this country right now, given the fear of minorities, and given the plight of millions of people seeking refuge from a war they didn't create, The Sympathizer is a timely read.

I can't say the same for another Pulitzer Prize Winner, Adam Johnson's The Orphan Master's Son.  I found this to be a pretty tedious read.  I read it a couple month's back, so excuse me if my memory is a bit foggy.  The book is a satirical look at navigating the politics and day-to-day living in Kim Jong Il’s North Korea. The book follows the travails of an orphan and his unlikely journey into the upper echelons of the North Korean political spectrum. Alas, the satire is so broad, I had trouble getting a sense of what really goes on in North Korea.  So many of the scenarios seemed so absurd, that the book never seems grounded.  It ultimately comes across as silly rather than biting.  It had its moments that could suck you in for a spell, but my attention and level of caring wandered throughout.  Pretty sure he was going for a Joseph Heller or Vladimir Voinovich vibe. Alas, without being familiar of the reality of life in North Korea, the satire falls short.
Posted by Plotbox at 12:34 PM No comments:

Email ThisBlogThis!Share to TwitterShare to FacebookShare to Pinterest
Labels: books 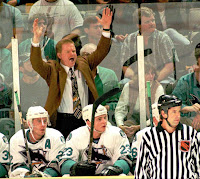 Can’t tell you how excited I am to see the San Jose Sharks take a shot at winning the Stanley Cup.  When I moved to SF in 1987, there was no hockey here.  My friends and I went to see NHL exhibition games at the Oakland Coliseum (yes, that was a thing).  When the Sharks were awarded a franchise in 1991, I was there.  I can proudly say I’ve been to a Sharks game every season they’ve been around with the exception of the year I had back surgery and the strike years (the NHL can be idiots, and I refused to give them my money those years). I’ve spent countless hours watching this team through thick and thin.

The local media pays no attention to them. The SF Chronicle axed their beat writer years ago, and they usually start their playoff coverage late in the post-season, usually the game before they get eliminated.  The national coverage usually just focuses on The Sharks dubious playoff performance.  To my surprise, the Chronicle has jumped on the bandwagon this week, with lots of good coverage.  My favorite piece was this article listing 25 great moments in Shark history.  It’s an excellent read, written by their former beat writer Ross McKeon who knows his hockey and his Shark history.  This piece reminds us that for all their recent playoff troubles, people forget that this franchise has been so good for so long.  From the mid 90s to the early 2000s, they were the low seeds who upset plenty of high ranked teams along the way.  Talk to Wings and Blues fans about that.  McKeon gets beyond the tired narratives and digs the rich and checkered history.

Some of my fave Shark moments include:

• Watching a game in the inaugural season, sitting in the last row at the Cow Palace and realizing that was probably the closest I’ve ever been to the ice at a pro hockey game.  Though it was falling apart, watching a pro sports team in a 5,000 seat venue was amazing.

• Bumping into Shark’s owner George Gund at a film event and complimenting him on the re-signing of Vincent Damphousse.  Gund invited me to call him up for tickets whenever I wanted.  I took him up on that once a year.

• Courtesy of Gund tix, sitting on the glass right behind the goal at a Rangers game, and watching beer fall into the laps of the rubes who set their drinks on the dasher. Who was at this game? Jason Wolos, Eric Henry, KC Smith?

• Sitting in a hotel room in San Antonio with Gil Ray, while on tour with The Loud  Family, and watching the underdog Sharks eliminate the Blues in 2000.

• Going to a Blues/Sharks playoff game in early 2001, again courtesy of Gund.

• Taking in several games through the years with Jay Hinman.

• Appearing on the Jumbotron not 1, not 2, but 3 times in a separated at birth gag.  I got compared to Bert from Sesame Street so that was ok. I like Bert.  That said, having people shout “Bert” at you in the concourse while waiting in the bathroom line – not so great.  FYI, after my first appearance, the av crew just used stock footage of me.  That’s not cool.

• And maybe best of all, watching the mascot, Sharkie, get in a fight with a loudmouth fan (witnessed and written about by Anthony Bedard)!

Posted by Plotbox at 1:19 PM No comments: