It Ain't Easy Being Celine: Conversations With Professor Y 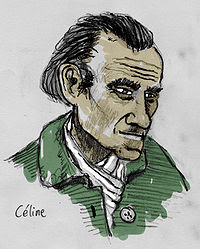 I’m a huge Louis Ferdinand Celine fan. Sometimes a tough position to defend due to his anti-semitism. But there’s no questioning the brilliance, the passion, and the importance of his writing. Biting satire, pitch black comedy, explosive language, passionate misanthropy, and those damn dots…rewriting the book on ellipses. Most folks, if they’ve read Celine, have gone for the early classics. The brilliant Journey To The End of The Night and the great coming of age story Death on The Installment Plan. I’d venture to say that his final trilogy, consisting of Castle To Castle, North and Rigadoon…which he finished the day before he died, may in fact be his best works. Those three novels are an absolute phantasmagorical and singular look into the fall of the Third Reich, chronicling Celine, his wife and their cat Bebert’s journey from France, through war-torn Germany and on toward Denmark.

Why bring all of this up now? Well, I just finished reading Conversations with Professor Y. In a sense, this is his come back novel. Celine, certainly according to Celine, was public enemy number one in France post WWII. Rather than take the chance of being tried for war crimes or being lynched by an angry mob, Celine headed for Denmark, ultimately spending a couple years in jail while the Danes figured out what to do with him. When he returned to France, he was a forgotten man, his books were out of print and he still was politically tainted. His publishers suggested he write a new novel to re-introduce the French to Celine. What he came up with was Professor Y…a faux interview, where Celine, in the guise of the bumbling Professor Y, interviews himself. It’s Celine at his crankiest and most embittered. Publishers, the movies, the reading public all come under Celine’s withering gaze. It’s a manic laundry list of complaints, all the while, Celine arguing for his place in history, as the man who brought the passion of the spoken word to the written page. He’s right of course, and the list of authors he went on to influence is impressive. But it’s a strange and bold maneuver for a comeback.

Not sure that this is a place where the uninitiated should start, but it’s a great read and a must for any Celine fan. Professor Y fits in nicely alongside Castle to Castle, a novel where Celine spends an awful lot of time not talking about WWII, but instead complaining and chronicling his aggravations as an aging, penniless country doctor. It’s hard being Celine.
Posted by Plotbox at 12:50 AM

Email ThisBlogThis!Share to TwitterShare to FacebookShare to Pinterest
Labels: books